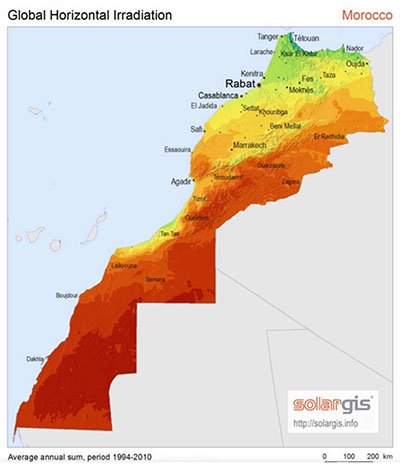 Since 2012, Morocco has launched one of the largest solar power projects in the world, at an estimated cost of $9 billion. The project aims to create 2,000 megawatts of solar generation capacity. The Moroccan Agency for Solar Energy (MASEN), a public-private company, was created to lead the project and once completed, the solar project will provide 38% of Morocco’s annual electricity generation. Why Morocco?

– Solar power in Morocco is possible because the country has one of the highest rates of solar insolation among other countries: about 3,000 hours a year of sunshine, but up to 3,600 hours in the desert. Northeast Africa is particularly notable for its world records for sunshine. The area experiences one of the longest average annual durations of bright sunshine in the world.
– Morocco is the only African country to have a power cable link to Europe. The cable sent 5756 GWh from Spain to Morocco in 2017, and very little in the opposite direction.
– The energy needs of the water sector in Morocco are predicted to increase, not least because the water table of aquifers is reduced with overexploitation. Thus, the cost and energy intensity of pumping will increase considerably.
– More than 90% of farmers hesitate to choose solar pumping systems for financing reasons, even if they are completely convinced of their economic relevance in the long term.
– The total installed capacity in Morocco in 2015 is 8154 MW, with 34% of renewable energy with the following mix: coal (32%), natural gas (11%), hydropower (22%), fuel oil and diesel (24%), solar (2%) and wind (10%).

On the other hand, there are the objectives described in Morocco’s Nationally Determined Contribution (NDC) are (AMEE, 2018b):

Why are energy needs forecast to increase?

– The opening of drip irrigation projects.
– The implementation of desalination and water transfer projects.
– The use of energy-intensive conventional resources for water supply.
– The development of new sanitation activities and wastewater treatment plants.

Therefore, thanks to the European Union and the Horizon 2020 project funds, Morocco has emerged as a great investment opportunity, both in terms of capital and work in renewables. If you are interested and want to learn more, access the shared documents you will find here.

We use cookies on our website to give you the most relevant experience by remembering your preferences and repeat visits. By clicking “Accept”, you consent to the use of ALL the cookies.
Cookie settingsACCEPT
Manage consent

This website uses cookies to improve your experience while you navigate through the website. Out of these, the cookies that are categorized as necessary are stored on your browser as they are essential for the working of basic functionalities of the website. We also use third-party cookies that help us analyze and understand how you use this website. These cookies will be stored in your browser only with your consent. You also have the option to opt-out of these cookies. But opting out of some of these cookies may affect your browsing experience.
Advertisement
Advertisement cookies are used to provide visitors with relevant ads and marketing campaigns. These cookies track visitors across websites and collect information to provide customized ads.
Analytics
Analytical cookies are used to understand how visitors interact with the website. These cookies help provide information on metrics the number of visitors, bounce rate, traffic source, etc.
Functional
Functional cookies help to perform certain functionalities like sharing the content of the website on social media platforms, collect feedbacks, and other third-party features.
Necessary
Necessary cookies are absolutely essential for the website to function properly. These cookies ensure basic functionalities and security features of the website, anonymously.
Other
Other uncategorized cookies are those that are being analyzed and have not been classified into a category as yet.
Performance
Performance cookies are used to understand and analyze the key performance indexes of the website which helps in delivering a better user experience for the visitors.
SAVE & ACCEPT
Powered by